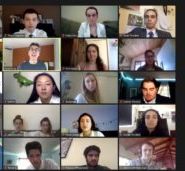 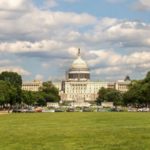 For three decades, the juniors and seniors of Mount Madonna School (MMS) have traveled to Washington, D.C. every other year to interview government and non-government leaders. This rite of passage introduces MMS students directly to those who lead in the larger world. Now, for the first time since 1989, students were unable to take this transformational journey.

“As teachers, Shannon Kelly and I felt the only option was to try to find a way to move our interview program forward anyway, and redeem something from a disheartening turn of events by setting up virtual interviews,” wrote SN Ward Mailliard, founder of the Values in World Thought program, in a pre-trip reflection. “Would it work? Would people say ‘yes’? Would the students buy in? We can only know the answers by trying.”

And try, they did. On May 4, junior and senior students “embarked” on Zoom interviews with Washington, D.C. leaders. They concluded an array of interviews with such luminaries as former Secretary of State George Shultz, Senator Joe Manchin, Congressman Jimmy Panetta, Alyse Nelson, president of Vital Voices, and Laura Liswood, secretary general of the Council of Women World Leader on May 8, and the “results,” chronicled on a student blog, reveal new perspectives, astute observations and unanticipated insights.

“This year’s journey required us to imagine a new “double-distance” learning effort that took us into the virtual realm,” reflected Mailliard, “first from school to home and then onto Washington, D.C. We heard Alyse Nelson and others speak about finding a wider vision to see beyond the limitations of these times.

“Along the way we discovered that this process is really working,” continued Mailliard. “We are doing something way ahead of the curve for students and it is really helping them to focus and thrive.”

“Thank you for all of the time and effort you put in for us to have successful interviews,” wrote Vince in an email Mailliard and Kelly. “I’m not only referring to setting the interviews up, but also staying up as late and getting up as early as you did to work on our questions, and to help us dig deeper within ourselves to ask what we really wanted to know. I can’t imagine how this process would have gone without both of your efforts and persistence to educate us and help us grow into better people.”

In response to the students’ blog, Laura Liswood, Secretary General of the Council of Women World Leaders, and one of the interviewees, shared her appreciation for the opportunity to speak with the MMS students. 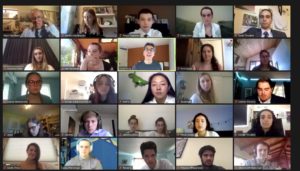 “I am so impressed with your students and humbled by their comments,” commented Liswood. “Please send them a warm thank you from me. Each of them has the hallmarks for success.”

One of the students’ conversations was with David Yang, a Chinese-American refugee and vice president for Applied Conflict Transformation at the United States Institute of Peace.

“Mr. Yang’s response was the best answer I have heard about the phenomenon of our electoral choices, and very wise words on what we need to attend to if we want a peaceful, sustainable world,” observed Mailliard.

What follow are excerpts from a few of the student’s reflections posted on their learning journey blog. To read more, visit the blog at dc.MountMadonnaSchool.org.

“Not only was Hardin Lang able to bring light to many situations that I did not have complete understanding of, but he also made me look at policy with a new perspective…I was struck by his ability to see the whole picture, or as he calls it, “being upstream of the problem.” There is an exhilaration that comes from fighting the problem head on, but sometimes real change must be made from the top down. And, it is not about being the savior, it is about changing the situation so that people have more choice. I hope that I can learn from his passion and mirror it in my life, seeing the bigger picture, seeing where I can truly make the most change.” – Tabitha Hardin-Zollo, grade 12

“I found Senator Joe Manchin to be a man with integrity and honor…Something I would say is very prominent within our nation is the belief that there is a definite right and the definite wrong answer to most issues. The nation is split in two, and there is no side that one can blame. We as humans are often closed off to opinions we deem as wrong. We have this pack mentality, where you are either with us or against us. Yet Senator Manchin is out there, voting for what he believes is right. I found that truly honorable and inspiring.” – Ronan Lee, grade 11

“In response to a question on bi-partisanship, Senator Joe Manchin said, ‘Washington has become tribal.’ He commented on how you’re forced to pick a side, red or blue, and that his only answer to that can be that he is red, white, and blue: an American citizen…His beliefs and ability to ask for compromise and advice was something that greatly inspired me and caused me to question how I’ve been living my life. I may not be making the large life changing decisions that senators make on a regular basis, but I’d still like to go about my life with even half of the confidence in my decisions that Senator Joe Manchin displayed to us today.” – Rowan Davenport-Smith, grade 12

“This morning we had the chance to interview Laura Liswood who is, among many things, an accomplished lawyer, author, and the Secretary General of the Council of Women World Leaders… Something that struck me was when she began discussing the relativity of happiness. She described to us an image she saw of Michael Phelps winning a gold medal at the Olympics, and how he appeared to be thrilled to have won. Next to him were both the silver and bronze medal winners. The person in second place looked disappointed, as if they were upset that they did not get first place, but the swimmer who won the bronze medal was by far the happiest of the three, joyful that they placed in the top three. This idea that happiness is relative is extremely true, and I appreciated that she emphasized its importance.” – Aaron Saavedra, grade 12

“In a time of so much loss, we had to think beyond what wasn’t working, to what could work,” commented Mailliard. “We did not know when we began if this would work, and discovered not only that it exceeded our expectations, but brought new creative possibilities for the next school year and opened up the wider world for our students.”

Perhaps this is the lesson for these times.

“This week-long, double-distance learning created a community for the students,” Mailliard continued, “built bridges of understanding to the larger world, and let the students learn from people who have made their lives part of the solution.”