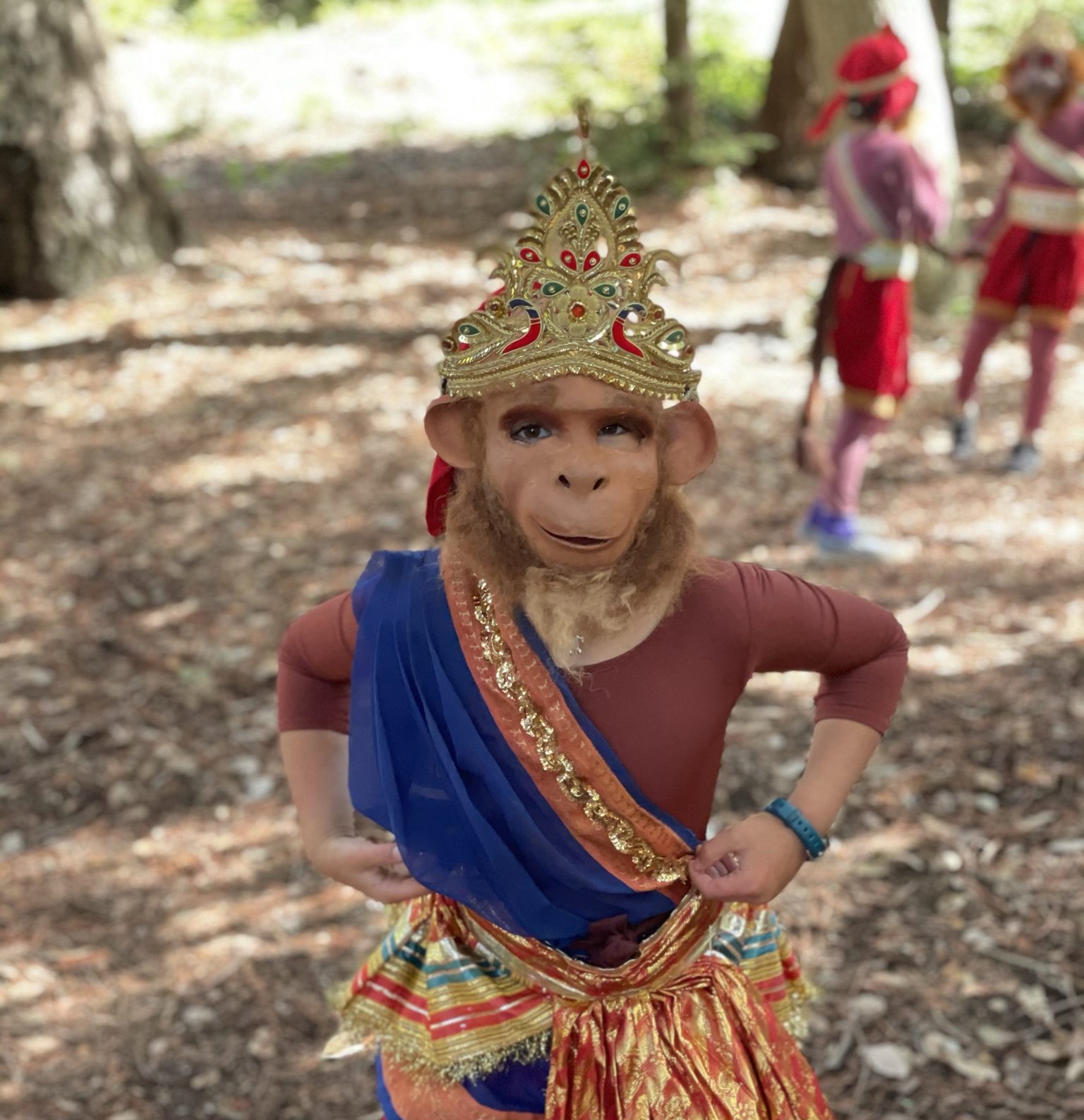 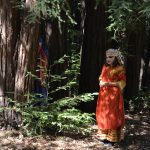 Fourteen years ago, I was a new parent and a new teacher at Mount Madonna School (MMS). I was a refugee from a job at Genentech that had me commuting far away from my three year old, and doing nothing with my day that felt fulfilling or creative. A voice in my head said to look in the paper one day, and there was a job posting for an AP environmental science teacher at a school I’d always dreamed of sending my children to.

I had no idea whatsoever about the origins of the school, the connection to Mount Madonna Center, or the Ramayana!. 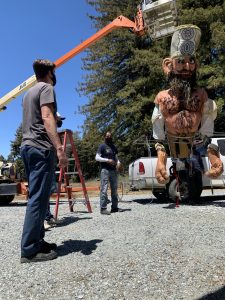 That first year, my son refused to put on his green tights and get in the crocodile costume, and even then, without knowing anything about the play, I was saddened. But he went to all of the shows and developed a relationship with the senior who was playing Prince Lakshman. He saw him twirling staffs and defeating that dragon on stage, and backstage, that wonderful high school kid played and played with my son. My child was on top of the world, whether he was in the play or not. Amazingly, just today I spent an afternoon with the kid who played that very Lakshman, now a strong working adult, back at the Ramayana! film site. He was here to play the giant for us.

Every year since, I weep when I see the forest animal scene and the senior leads and goddesses hold the little children’s hands on stage. Because I know that connection, and that circle, are very real, very special, and unique to our school.

Those of us who have spent years rolling around in this meadow of spring flowers that is the Ramayana! have so many deep connections to it. If you are a parent of an actor in the show, you work double time that week, volunteering and learning and carrying out all the parent support your children need. If you are also a teacher or a school staff member, you work quadruple time. For me, the year we all finally realized teacher-parents really need one night off to see the play from start to finish was a gift! You’ll see us peeking in to look at our kids’ scenes every other night! 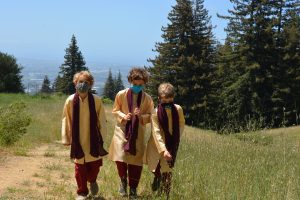 All the work is fine, though, I do it happily and enthusiastically. It’s a chance for me to know my students, both backstage and onstage as something completely different than their science teacher. It also brings our family to town in numbers we don’t see at Thanksgiving or Christmas; our relatives just love to see the play and feel the wonderful energy it brings to the community.

There are 300-plus costumes, 160 actors and more than 400 hands that touch the play other than the ones you see on stage. All of the crowns the students wear in the play were inspired by Baba Hari Dass, and built by him and a dedicated crew – and every jewel has meaning.

Baba Hari Dass, or “Babaji” as he was affectionately known, was the inspiration for the founding of Sri Ram Ashram in Haridwar, India, and Mount Madonna Center and Mount Madonna School. There is history, culture, tradition, and the creativity of 1,000 souls poured into the show encompassing 43 years of history of Mount Madonna School and of the process of bringing yoga to the United States. 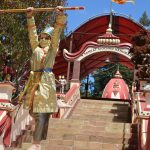 Co-producer Jeevani Vince, who is also the parent of an MMS alum and a current senior, shared that generations upon generations show up for the Ramayana! and help, including families and relatives who no longer work at the school. Students who do not choose to participate in the winter productions still want to work on the Ramayana!. My reunion just today with Lakshman from fourteen years ago is a case in point. It’s a big deal.

As an education researcher, I have never stopped being amazed at all the unintended benefits of the show in the way it builds our kids’ intellect. We have third graders who can analyze a hero’s journey; fifth graders who understand the difference between ego and the divine self; American high school students who are steeped in another culture, and as such, are humble in the face of cultural difference.

Last year, when we could not have our Ramayana!, my wife and I found costumes around the house, dressed up in them, and invaded our tenth grader’s bedroom every day performing scenes to cheer him up. He barely smiled. 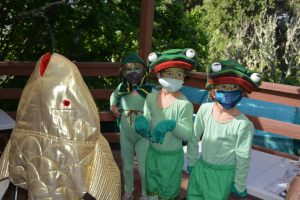 You see, starting at age four, he and his carpool mates would talk about the show all the way up the mountain on their commute from Santa Cruz, and all the way down again. They wouldn’t stop casting everyone in their class, analyzing the show, singing the songs, performing the scenes, and talking about their costumes and the theatre. This went on every spring, for most every child who stayed at MMS and grew up here. Losing the play due to COVID restrictions was bigger for my son than losing the junior nationals in his club volleyball program!

Jeevani Vince shared with me that her kids sang Ramayana! songs every March and had long conversations guessing at the cast list, even when they were living abroad in Vienna and couldn’t participate in person. 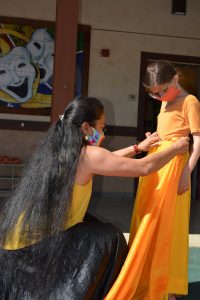 Fast-forward to this spring. This year, the week before spring break, this feeling started to flow around our campus like the light at the end of the pandemic tunnel had begun to shine at us. We are not doing anything different yet, but there was just this feeling. For me, it came from the moment I heard “Jai Jai Ma,” sung live by our kids, floating across the quad. I came around a corner and saw the invocation dancers practicing, singing the music as they went, through their masks. Something in my heart settled back home again. Later that day I saw the office staff sewing and gluing shimmering gold fabric over face masks, and I thought, we have been devastated, but we are rising again. We are figuring it out. And as we do, we are making this moment in history be all that it can be.

Gitanjali Lori Rivera, director of Ramayana!, told me that performing arts has felt untethered by the pandemic, but now, suddenly, has “an anchor.”

“These children have grown up with this play their whole lives, and we don’t know what it will look like 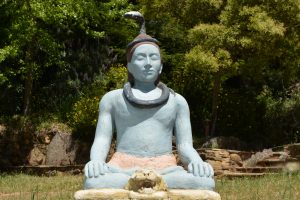 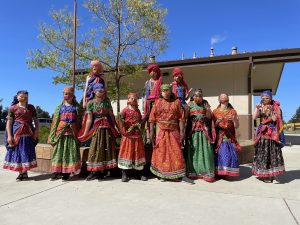 Our music teacher and director Anand Darsie left MMS prior to the pandemic to pursue a music career. He found a wonderful home with the band Hello Forever in Los Angeles, but returned this year to help with the show. I caught up with him in a Ramayana!  pandemic-proof recording studio he created beside the upper campus in a cabin at the Mount Madonna Center Oaks Camp.

He had created a triple-layer fabric mask over a window screen, and was standing behind it with 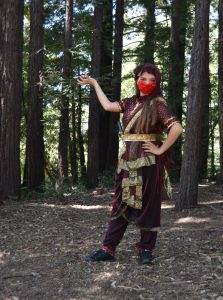 recording equipment while an unmasked student sang into a microphone, outdoors distanced from him on the deck. It was an ingenious way for him to be there as the wonderful voice coach that he is, safely teaching a singer.

Most years, I just soak in the Ramayana! music shared from the throats of the entire middle and high school, wafting across the upper campus every Friday afternoon from the assembly room. This year, I’m just floored by the creativity and problem solving I run into everywhere on campus as all of us who love this show nurture it, hold its hand, and walk it gingerly across the last days of the pandemic to the other side.

“Ramayana! is a life unto itself, created by a community of people who share the common experience of bringing life to this ancient epic,” shares Jeevani Vince. “I think Baba Hari Dass knew the universal values woven into Ramayana! would subtly permeate the ethos of those who take part in it year after year.”

One of those values is creating an inclusive community, and this spring, I see that community standing strong together, finding a way forward.