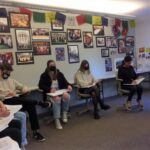 In May, as part of the Values in World Thought program, junior and senior students will be traveling to Washington, D.C. to experience government in action. One key aspect of the program is providing students the opportunity to engage in conversations of meaning with thought leaders nationally, internationally and locally.

On January 21, the juniors interviewed, via Zoom, Supervisor Manu Koenig. Supervisor Koenig was

elected in 2020 to represent the first district of Santa Cruz County. In preparation for the interview, students researched Supervisor Koenig, learned about the art of crafting interview questions and discussed the cadence of a good interview. The fact that Supervisor Koenig attended Mount Madonna School for a portion of his education helped put the students at ease and made it a great first Values interview experience for them.

Below are some of the students’ reflections on their experience.

“Leading up to the interview, I did not necessarily know what to expect. Talking to Supervisor Koenig gave me much more insight into how the district choices are made, as well as more detail on the current policies that are being put in place.” – Sky Weir 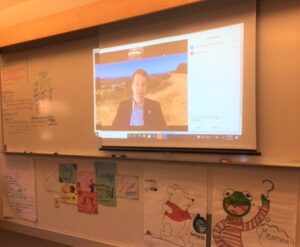 “I was impressed by Supervisor Koenig’s response to Sky’s question, ‘How do you prioritize how money and time will be allocated?’ He quickly locked on to a very concrete specific case of its use, and gave a thorough and concise history on the subject. It truly shows how knowledgeable he is on the subject. One thing I think can be learned from Sky’s question is that if you give someone who’s passionate about something an opportunity to talk about it, then they will. So, there is a considerable art to engineering a question to be broad enough to touch on something they are interested in but focused enough to provide direction.”  – Sandy Astone

“The interview was a one-of-a-kind experience for me, and one thing that really struck me was how smart Manu Koenig is. One of his stories, which was about how he witnessed first-hand the destruction of coral reefs, and how that inspired him to go into policy-making made me think about how personally distant from certain issues I can be and how I need to work on that in the future. He also talked about some concrete steps he was taking to help, such as the reusable takeout containers and the incentives for buildings to be more environmentally friendly.” – Jacob Sirk-Traugh

“One thing I found particularly impressive was his response to Bella’s question about getting people to sacrifice their self-interest for the common good. He said his approach is to empathize, inform, and ask ‘what are you going to do?’ He spoke on how important it is to find common ground between you and the person you are asking to sacrifice, and to approach the situation with human relations in mind. Supervisor Koenig emphasized getting the person to like you as a human being first and then bringing in the business of how you need them to give something up.” – Mariah Cohen

“It was a daunting thing, but when we started asking him questions, and he was giving thoughtful answers, I was very interested in what he had to say, and I enjoyed learning about all the topics he discussed with us. One issue in particular that I enjoyed learning about was the greenway implementation that will turn the rail corridor into a bike and pedestrian path. I learned a lot about how public office works at the county level, and it was very interesting and inspiring to hear Supervisor Koenig talk about all that he is doing and to see how he was able to put himself in a position where he could change the issues he saw in our county, state, and even country.“ – Cecily Kelly

”I was interested in the advice he gave about making change, getting involved and interacting with people in a positive and effective way. He said that when you aren’t sure how to approach making change or getting involved with a particular issue or cause, you should always ‘do what you think is more important at any given time.’ He also said that oftentimes life does not turn out the way we expect it to and I think that is a very important message. Even though we may have interests, passions, opinions and plans that seem concrete, not everything works out the way we predict. I think that keeping an open mind and working towards your goals without closing yourself off to the plethora of ways that you can achieve those goals is essential to growing as a person.” – Zoey Ocampo-Sobkoviak

“Throughout the interview with Supervisor Koenig, I was repeatedly impressed by his intelligence and ability to think about problems in fundamental and scientific ways. The first response that really interested me was about housing. He said that most cities are built in remarkably similar ways, an urban sprawl that is built for cars and therefore not sustainable in the years to come. I had never thought about that before, that cities were built for cars and not entirely the other way around. That kind of vision, of looking out into the future, of the building of communities, of seeing patterns and their causes, was inspiring and creative. He described it as ‘pioneer(ing) a new urban DNA.’ Even the language he used was analytical and logical.” – Sam Kaplan

“Another topic that he brought up was about reusable takeout containers. As an environmental person, my family’s solution was to reuse the containers or to just ask for no plastic bags, and even to just avoid takeout. Supervisor Koenig wants to create a system where all restaurants in Santa Cruz use the same reusable takeout containers and have a drop-off spot where the customer could drop off the container. I’ve never even thought about this or knew that there were companies like Vessel who had already made the reusable containers. Supervisor Koenig gives me hope that he will help change Santa Cruz to make it more environmentally friendly than it already is.” – Isabella Cambell

“Supervisor Koenig saw the environment being destroyed, and how our actions were facilitating that, so he decided to make a difference. That really stuck with me because I always hear about some new horrible thing happening in the news and I think ‘that’s so sad, I wish I could help, but I’m in high school. I can’t do anything.’ Koenig helped me realize that personally, even if it’s one small thing, it’s important to always try to make change in the world and in society. It’s our obligation as human beings to do what we think is right to help advance and heal society.” – Camille Hudson

Dirctor of Upper School Shannon Kelly also teaches the Values in World Thought classes for juniors and seniors.  An MMS alumna, she graduated in 1992.