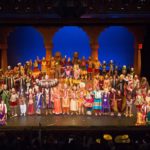 “Ramayana!,” the Mount Madonna School’s annual musical theater production, which is now in its 41styear, will have performances June 6-9 at the Mexican Heritage Theater in San Jose, Calif.

Attendees of all ages can join Hanuman, the monkeys, and Princes Ram and Lakshman as they journey to Lanka in their quest to rescue Princess Sita in this Broadway-caliber production adapted for modern audiences and replete with lively action, dazzling costumes, family humor, and universal life lessons, stated a press release.

With a cast and crew approaching 200, and involving all students – preschool to grade 12 – “Ramayana!” tells the story of Prince Ram and Princess Sita and her abduction by the demon King Ravana. Set to a mix of traditional and contemporary music, the show features an adult choir, musicians, and more than a dozen original, standout songs.

“‘Ramayana!’ has been central to Mount Madonna School since its founding,” said Mary Supriya McDonald, head of the school. “It’s the culmination of months of work during the academic year and is a year-end celebration for our community embracing diversity and creative self-expression. With this show, we carry forward a tradition inspired by Baba Hari Dass (1923-2018) and supported by the Mount Madonna Center. The Ramayana is a timeless classic teaching the universal values of truth, duty, love and service to the greater good.” Read more