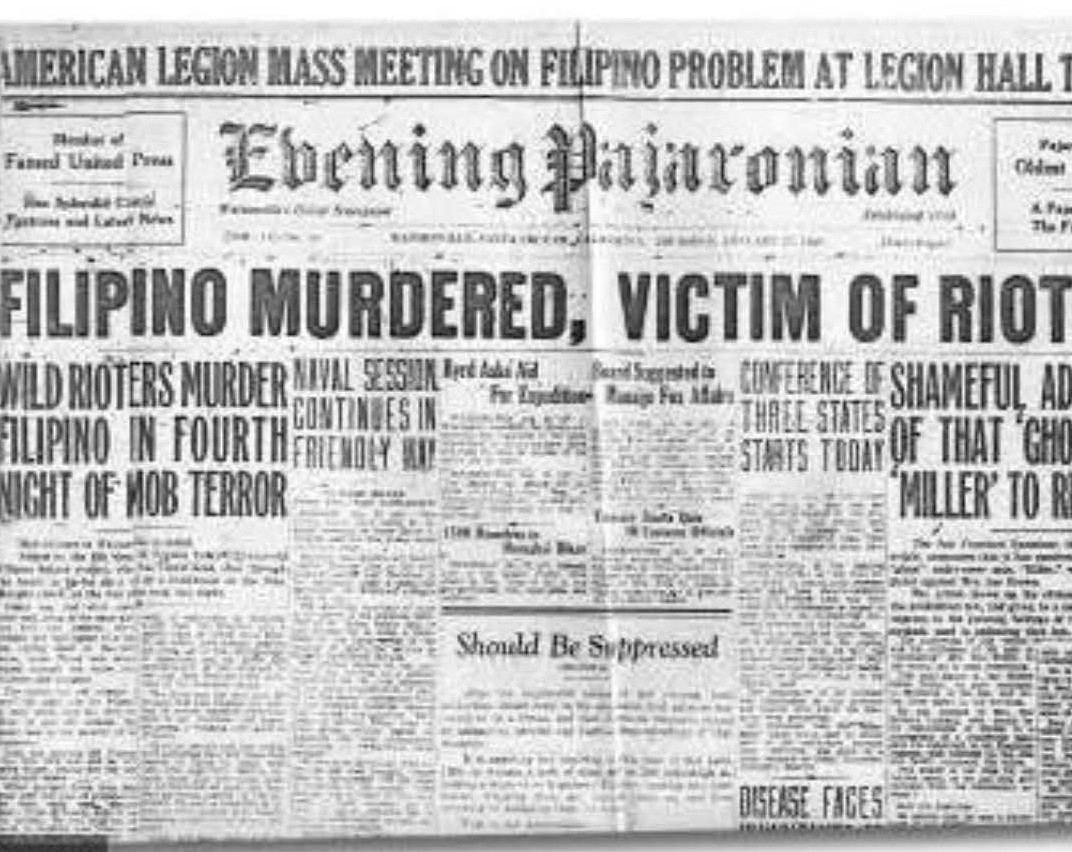 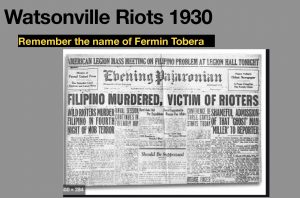 Last week Jason Galinato Agpaoa and some of his fellow Asian Cultural Experience (ACE.org) members were guests via Zoom in the Mount Madonna School (MMS) U.S. History class. Agpaoa spoke with students about the history of Asian Americans, and particularly Filipino Americans in the local community, as well as the Watsonville Riots of 1930.

“Jason’s presentation fit nicely into our history curriculum because the Watsonville Riots were covered up for so long and never talked about,” commented sophomore Mariah Cohen. “I don’t think anyone in my class knew what they were until our teacher, Dan Gurska, exposed us to this horrific history. Learning about these riots is important because they happened here in Watsonville, where our school is! Finding out that something this terrible happened so close to home was a real eye-opener, because it kept me from thinking that the bad parts of history weren’t where I live; that they were in the South or anywhere else but here. A lot of the things we learn about in Dan’s class are stories told from a different perspective, stories that have somehow been twisted through the years, or just pieces of history that haven’t been widely told.”

Classmate Sam Kaplan offered his reflection on the conversation with Agpaoa.

“The importance of stories in history and in our world is difficult to overestimate,” said Kaplan. “We as humans are not perfectly rational, but are very emotional and are always looking to explain our world in a way that resonates with us, a way that tugs at our heartstrings and feels right. History can be taught in a chronological way, with numbers and dates and events, fragments or snapshots in time, but this method doesn’t always resonate with us, the past events are lost among the present ones, the numbers of the dead are forgotten, and we’d rather look at a snapshot of now, than of a hundred years ago. 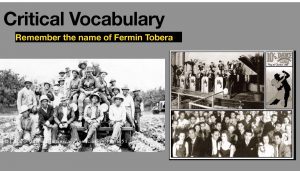 “One of Jason’s themes throughout his presentation was humanizing history, creating a visceral and empathetic connection with the people of the past,” Kaplan continued. “He did this through telling us the story of Fermin Tobera, a 22-year-old Filipino who was shot in the chest while sleeping during the Watsonville Riots, in which a White mob attacked Filipinos. It is this story that lives and demands our compassion when the numbers have faded from our memory. What is special about our U.S. History curriculum is that it is a collection of stories, each one told from a different perspective, so that we can piece together the sometimes harsh reality of the United States. Jason’s presentation on the Watsonville riots was another one of these, inspiring empathy and fostering a greater sense of understanding.”

Born and raised in Salinas, Agpaoa is an M.A. candidate in the Asian American studies program at San Francisco State University, and a museum enthusiast with working experience at the National Steinbeck Center, The Tech Interactive, and the California Academy of Sciences. Agpaoa is developing an Ethnic Studies Museum Education program as part of his master’s thesis. He is a member of Asian Cultural Experience (ACE), an organization with plans to develop a museum and cultural center in Salinas Chinatown, the largest active Chinatown between San Francisco and Los Angeles. For more information on this project, see https://acesalinas.wordpress.com/.

Agpaoa shared that a community rally, as a show of love and solidarity and to honor the lives lost in Atlanta on March 16, is planned for Sunday, March 28 at 12:00pm at California Historical Landmark 934, the Temporary Detention Camps for Japanese Americans, 940 N. Main (Sherwood Gardens Rodeo Grounds), Salinas.

“Jason and his friends at ACE agreed to come to our class, many weeks before the murders took place in Atlanta, to teach us about the Watsonville Riots of 1930,” shared Gurska. “Of course, we asked if he wished to reschedule due to the heaviness of the moment, and he expressed gratitude but felt it was important to support the work; he knew that the lesson that he had prepared was more relevant than ever. To say the least, our area has a lot of work to do in terms of recognizing its racist anti-Asian past.”