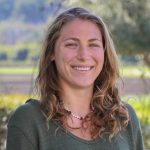 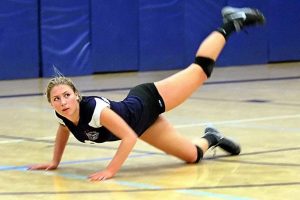 Hawks’ Nest to lead the team is Mount Madonna School (MMS) alumna, now Coach, Sophie Ortiz (‘16). As a high school athlete, Sophie was Freshman of the Year and All-Team in the Santa Cruz County Athletic League (SCCAL), competing with much larger, D-3 schools like Santa Cruz and Harbor high schools. As a student at California Polytechnic Institute, San Luis Obispo (Cal Poly), she continued her love and talent for the sport as a member of the Cal Poly Beach Volleyball Club. Sophie brings a fun, free spirit to all of her practices and games and we are very excited to have her back! – Stevan Manzur, middle school athletic director

Cross Country – March 23, 2021: Excitement and competitive tension generated an inaudible hum as our middle school Hawks flocked in preparation for their final cross country meet of the season. Now seasoned competitors facing familiar friendly-foes, they stood at the starting line with purpose, confidence and determination waiting to be released by the distinct crack and command of the starting pistol. Our Hawks soared around the 1.6 mile course!

Spectating parents who had trekked up the trail to snap an action photo found themselves in a race of their own as they dashed down the hill side to the finish line for the final photos. The grimacing faces, panting and exhausted runners made it evident that they had followed Coach Nicole’s instructions to do their best and leave it all on the course. The pained looks were soon replaced by smiles and the euphoria of accomplishment as they realized they took the top positions and set new personal records.

Congratulations to our Hawks on an amazing and successful season! Thank you to Coach Nicole Silva for her seemingly tireless positive energy and leadership, and to the dedicated parents who did all of the “extra” to make this season possible. – Stevan Manzur, middle school athletic director 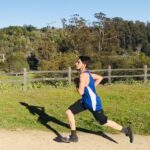 Cross Country – March 16, 2021: The team came charged up for their second meet at Anna Jean Cummings Park in Aptos. An occasional cold breeze contrasted the warmth of the sun that created a peculiarly concocted mixture that is perfect for running. Our Hawks blazed around the 1.6 mile loop taking top positions and recording personal bests.

Photo Note: Athletes are allowed, under current California Department of Public Health and Santa Cruz County Health Services Agency guidelines to remove their masks while running, and to be less than six feet apart when necessary.

On this day, one year ago, Mount Madonna School participated in what would be its last athletics competition and public event in almost a year. Middle school cross country and soccer coach, Nicole Silva, recounted the ominous day our Hawks played Twin Lakes School in a soccer match, a day that was soon followed by school closures, a worldwide lockdown, and upheaval of life as we knew it.

Three hundred and sixty two days later, our middle school Hawks set their footprints on the damp ground of Mission Springs and imprinted their place in history as they competed in a cross country meet against St. Abrahams, Kirby, and Pacific Collegiate school students. Clouds loomed overhead and threatened with downpours throughout the meet, but the student-athletes and community made up of parents, siblings, coaches, and school staff were determined to see this day happen. Looking around at the masked, cheering crowd, it was not forgotten that we are in the midst of a pandemic, but the universal joy of the gathering could not be veiled, the smiles could be seen in the eyes – the most genuine kind – and the cheers and laughter easily penetrated the multilayer fabric, reverberating into a textural buzz that could be felt like a warm, protective cloak. The rains held until five minutes after the last runner crossed the finish line. On that day a victory was shared by all of us as life persisted and joy prevailed! – Stevan Manzur, middle school athletic director

Thank you to Coach Nicole Silva for inspiring our young athletes! 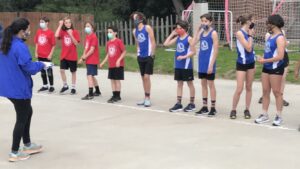 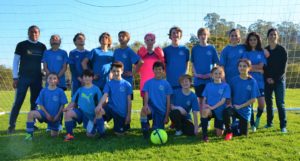 Coed Soccer, March 12: Take a look at the photos from Hawks’ match with Twin Lakes School at Cabrillo College. The Hawks won 3-0. Izaak Ocampo-Sobkoviak, Tej D’Costa-Hemp and Destiney Alvarez each had a goal.

“We have a very strong team and finished our cut-short season with a 3-1 record,” noted Coach Nicole Silva. Thank you to the parents who helped to support the team, and coaches Silva and Juan Gonzalez. 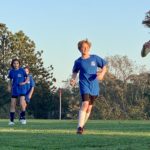 The coed soccer team is off to a great start with a very large team of 23 athletes from fifth through eighth grades and a 2-0 record!
The team played its first game last week against Salesian School and won 5-3 with some excellent plays! For its, second game, against Twin Lakes, the Hawks won 6-1 with David Monclus scoring the first goal, Colby Culbertson the second goal, Tej D’Costa-Hemp having a “hat trick” with three goals and Cisco Rothman-Salado finishing it up with the sixth and final goal. The athletes dominated play from start to finish, and most importantly, played very well as a team with great passing and communication!

We have a very talented and hard working team. Come out to one of our games and cheer on our fantastic middle school soccer team! The next game is Monday, March 2 at 4:30pm at Good Shepherd School in Santa Cruz. See the website calendar for the entire schedule.

For the week of October 21-25:
Coed cross country team: The team finished their final league meet of the season on October 23 at Pinto Lake. The boys team took 1st place, and the girls team took second! Such a great way to finish the season! “Thank you to all for a wonderful season,” said Coach Nicole Silva Culbertson. “It’s always a lot fun to run with the kids before school and watch them at meets. These young athletes have shown some amazing improvement and some serious competitive spirit!”

For the week of October 14-18:
Girls volleyball Blue team:
Despite a loss on October 15 to Stratford School, the team played with energy and it was an exciting match to watch! Photos by Chris Hudnut

For the week of September 30-October 4:
Girls volleyball Blue team:
With three games in one week, these girls have been busy! They played spirited and challenging matches against Merryhill, Hillbrook and Almaden Country Day School, resulting in two losses and one win.

Coed Cross Country:
On Wednesday, had a meet with the larger schools of the Pajaro Valley Athletic League at Lakeview Middle School. Emi Lord took 3rd place in her group, Tej D’Costa-Hemp and Mordecai Coleman placed 9th and 14th in their groups, respectively.